Armstrongs in Beverley (Grovehill Road, just next to Flemingate) have recently opened a new ice cream bar. They sell gelato from a Yorkshire farm and have a huge menu from traditional cones and tubs to Sundaes, build your own and waffles. I popped in with my children over the weekend to see what it was like…. 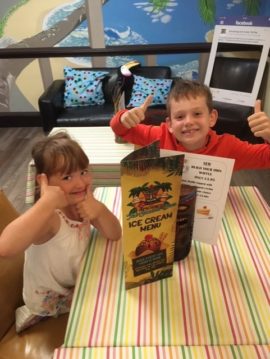 We needed to get some shopping done as my children have had a growth spurt and last years winter trousers and leggings are now half way up their legs. The thought of taking my kids clothes shopping fills me with horror, so after hearing that Armstrongs have their new ice cream bar we decided to head to Flemingate for shopping and break it up with an ice cream! If they did some shopping nicely (i.e. no moaning and no fighting!) they would be rewarded in Armstrongs.

Walking from Flemingate past Parway cinema and the college, Armstrongs in the next building you reach. There is street parking nearby but we used the Flemingate multistory as its only £1 for 3 hours. The room is lovely! It’s done like a Tiki Bar with beach and sea paintings on the wall and brightly coloured tables. The painting was all done by Toffe, husband of owner Sally-Ann, he is a fabulous artist and we’ve seen him previously carve the most incredible pumpkins at their Halloween events!

Our first task was to work out what to have as there was so much choice. Owner Sally-Ann explained they had gone for gelato instead of ice cream as it’s a healthier option with less fat in it. She tried lots but has decided to use a farm in West Yorkshire to supply them as they had a huge range of flavours, do a special new flavour each week and is very high quality. She also has a dairy free version and sorbets. You can have a straight forward cone or tub and choose from the flavours in the cabinet. There were also a few ‘animal’ options where the gelato comes in a bowl shaped like an animal! This was ideal for younger ones, my 5 year old picked a butterfly and it was a perfect size and there were a couple of extra treats on it. Her butterfly had 2 scoops on which she chose and was only £2.95, I thought this was very reasonably priced as in some ice cream shops its £2.50 per scoop before you even begin adding extras. 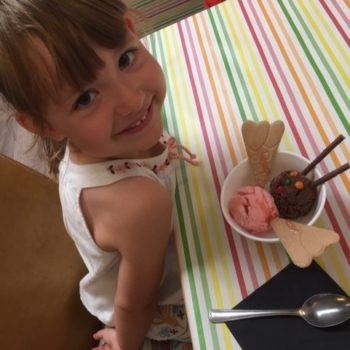 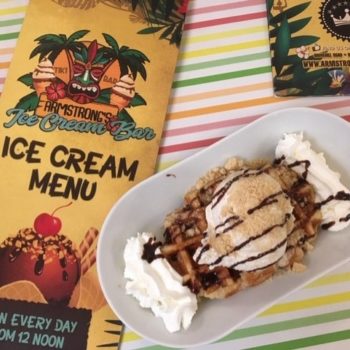 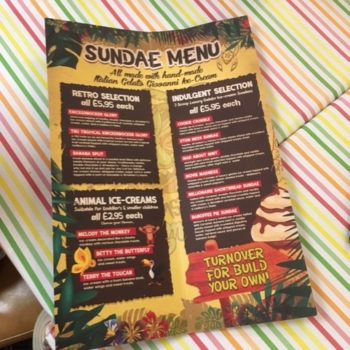 My son went next, he built his own Sundae. He went for a 2 scoop one but it was huge and he struggled to finish it (despite being an 8 year old boy who I struggle to fill usually!). He picked chocolate and banana for his flavours, he also got to choose a sauce and a topping! It looked amazing and it kept him quiet for ages!

I decided to go for a waffle and had their apple pie ice cream on it. Again I got to choose a sauce and a topping. I had taken my mum with me too (a tri-generational ice cream experience!) and she also had a waffle. She’s trying to cut down on sugar so she went for a plain waffle with vanilla gelato and no extras! Her vanilla was really nice, a very natural flavour and not artificial like some can be. 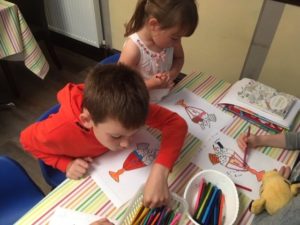 There is also a colouring table in the corner so my children coloured in an ice cream picture for the wall before we left. I ended up dragging them out as we’d been in for an hour and the shops were closing soon and we still had some bits to get! They also serve drinks, teas and coffees so I could have easily got a coffee and stayed longer.

It was a really fun experience, we all really enjoyed choosing the flavours, choosing our extras and watching them being created.

It’s very reasonably priced too so we would go in regularly, not just for a special occasion. On all options the extra toppings such as sprinkles, chocolate drops, fudge pieces, shortbread crumble were just 20p each so you could load up and not break the bank. There is also a fabulous offer for 10% off all orders with Mumbler! Hurry ends 28th September. Just mention Mumbler on ordering. You could pop for an after school treat or a visit this weekend!

Look out for their special themed days too where there are extra craft activities and games to do, the next is the Space Day on 28th September with a space and planets trail to follow and space themed craft. They also have special events in the social club next door, their Halloween disco is coming up on 1st November.