My ‘baby’ turned 2 recently I wanted to give her a little party.  To avoid the hassle and cost of hiring somewhere I wanted to do it at home, but didn’t know what to do.

Lets Tumble are a Beverley based family business run by the lovely Sally-Ann, who hire out soft play equipment to your home or choice of venue. I used them last year for her 1st birthday and it went down a storm. So I asked my little girl if she’d like to have soft play at home again and I got a resounding yes! I also have a 5 year old so wanted something he could do with her and not feel left out and this was idea for him too.

We have a conservatory coming off our dining room that we use as a playroom so the evening before we moved all the toys into the kid’s bedrooms and pushed the furniture back to the walls or in the lounge ready for putting the soft play into the conservatory and dining room. It was surprising how big a space we made to use when all the toys were moved!  Let’s Tumble deliver the equipment to your house (or any venue you choose) and set it up for you so it’s totally hassle free. They were due to bring it at 9am and were actually early so by just after 9am our house conservatory and dining room resembled a Soft Play Centre. It was really good quality and very clean. There was some good interlocking floor matting plus building blocks, a block area with a slide, stepping stone mats with letters & numbers, horse hoppers, a 2 seater spaceship and small ball pool. Both children were completely thrilled with it bombed around on it in delight for the next hour or so. 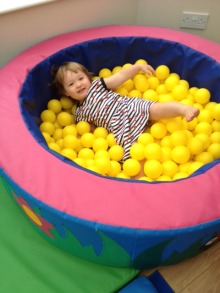 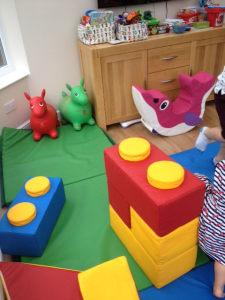 Who to invite at this age was a dilemma. With my first-born, we went to lots of playgroups and classes and made a good group of friends for him all of similar ages. When my little girl was born I had a 3 year old too so we didn’t get chance to go to many of the baby groups and make her some friends. The one class we did do from her being 5 months old (when my eldest was at pre-school) was Music with Mummy and she made a really good friend there. We got through the first couple of terms as class friends then me and her mum finally braved up to the ‘shall we swop numbers’ conversation which is utterly embarrassing as you are basically saying ‘so you seem to like me and my child enough to do a half hour music class with me but do you like me enough to come to my house for a playdate’, and the answer might be no! Luckily it was yes and her little girl has been great friends with mine since.

She came to the party, then we just had a couple of friends I made with my little boy who have also had younger siblings since, plus immediate family. My little boy also had 1 friend to play during the party so it was just the little ones on the soft play and he went outside with his friend to play football in the garden. All of the toddlers loved the soft play, other than a quick food break they were all on it whole time and it went down really well with everyone.

I did the children some lunch at 12, just a couple of pizzas in the oven, crisps, fruit and buns, and we had a cake and candles to blow out. I put out extra crisps and buns for the adults but I didn’t do lunch for them as I (selfishly!) didn’t want to spend all of the party in the kitchen! 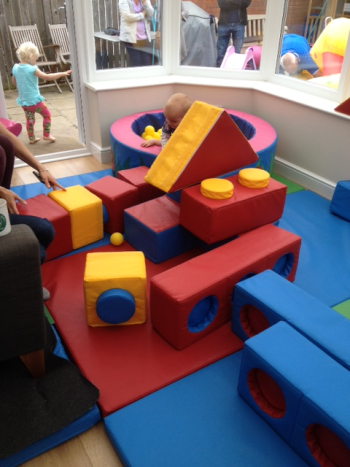 5 years of parties with my son I know how full on parties can start getting as they get older, so I wanted to keep her 2nd birthday as low-key as possible. For me a 2nd birthday shouldnt be about having the best kids entertainer or the biggest spread of food, its about your 2 year old having a really fun day. Its also about the parents having a fun day. The soft play we’d hired kept all the children entertained so didn’t have to do anything, I actually had a conversation with people and enjoyed watching my kids play.

At 1pm Lets Tumble returned, took all of the equipment apart and put it back into their van, there was no cleaning up for me to do. My 2 year old crashed out for a huge nap, my 5 year old and me crashed out with a film, then we went to the local pub for tea. Compared to other parties I’ve done or been to it really did feel relaxed and enjoyable. Most importantly my toddler loved her party, she’s been asking since ‘when is my party back again?’ The answer is probably next year! 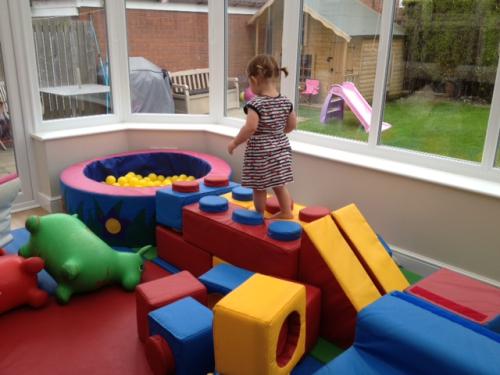 Lets Tumble are listed in Mumblers ‘Kids Parties, Entertainment’ section here. You can check out their website here, find them on facebook here or contact Sally Ann on 07855830685 or sallyann@letstumble.co.uk

Sally Ann also runs Armstrongs in Beverley which can be hired out for a venue for a party. She offers £10 off the cost of the soft play hire if you use Armstrongs as a venue. 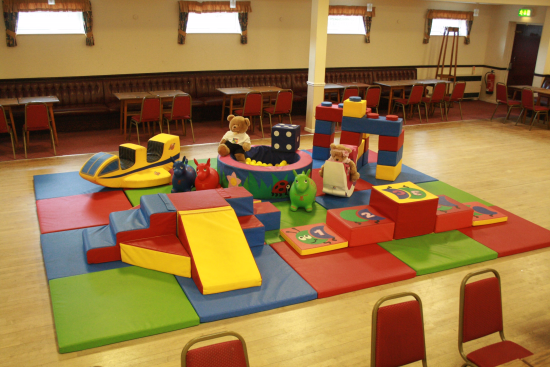