They teach on a Saturday morning at Beverley Grammar School, teaching children from age 6 to 18 in the Main Academy and ages 4 – 5 in their Poppets Academy.  My little boy is 5 and likes singing and dancing around the house so I took him along to a Poppets class to see what it was like. 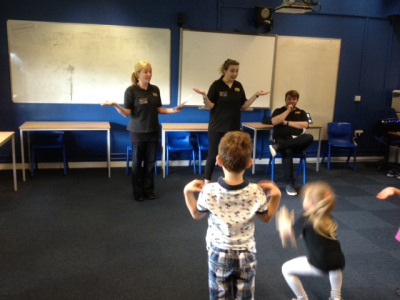 The Poppets class runs from 9.45 – 11.30am. Parents can leave their children for the session but I stayed to watch and really enjoyed seeing him learn new things. All of the children started together in the main hall with a short assembly where the Principal welcomed them and shared news, then the individual groups’ teachers shared what they would be doing today. The Poppets teacher said they would be starting to work on an end of term show, Alice in Wonderland. Older groups were going to produce a circus themed show, with musical numbers from Barnum, sideshow themed short films and clowning and physical theatre acting styles. A very varied morning across the Academy!

The Poppets then went to their own classroom with their teacher and her assistant. Both ladies were very friendly, welcoming and enthusiastic and also, as I started to watch them, very talented performers. They started with a warm up, saying their names in different styles and several other games including moving around pretending to be pulled by an invisible string, which my son loved and has been doing all around the house since we got home! The first activity was to learn a poem from Alice in Wonderland. Some of the lines they spoke together as a group, some were individual lines, and they learned actions to accompany it. After a short break for snack time they learned a song from Alice in Wonderland, ‘In the Golden Afternoon’, singing the words and pretending to be flowers in the garden.

At the end of the class the parents came back in and the children performed their poem to them. My son said this was his favourite part. They also gave the ‘Poppet of the Week’ student their class bear, Quirky, to take home for the week which the children were thrilled about.

I was really impressed with how the teacher kept the children focused – they all behaved very well for her and joined in with everything. She mixed up learning the poem and song with lots of games and all of it was a lot of fun. I was also really impressed with how much they learned in such a short space of time. As a mother of a rather boisterous, energetic boy, it was a great activity for him to do. He concentrated, listened and did something different to his usual running around and said afterwards he really enjoyed it.  The Academy also had a very welcoming feel – they all felt like one big family.

PQA’s Principal, James, also showed me around the rest of the Academy, where the older children were taking part in exciting lessons in Comedy & Drama, Musical Theatre and Film & TV. I was impressed with the positive atmosphere, the excitement in the classrooms and the varied range of performing arts skills the students learn.

I’d definitely recommend these classes for boys and girls wanting to try something a bit different. If you want to try the classes they offer a FREE taster class. To book one or for more info please contact the Principal of the Academy James on 07753 179079 or email james@pqacademy.com or check out their website here. 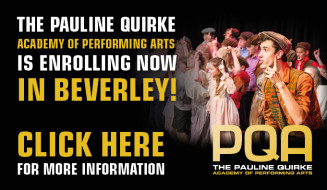