We’ve been taking about it for years: should we or shouldn’t we go to Lapland. I’ve heard so many people go and say it’s amazing but it looked an awful lot of money for a holiday.

This year (Christmas 2019) we decided it was the last year we could probably go and enjoy all of it; my children are 5 and just turned 9 and my eldest had a lot of questions about if Santa was real or not. For my youngest to be old enough to remember and enjoy it, and for my eldest to still believe in the magic of all of Christmas, 2019 was our year! We finally booked a holiday and went 16th to 19th December 2019 on a 3 night holiday with Tui. So here is my Mumbler Lapland Lowdown! All you need to know if you, like me, are thinking about going but haven’t got a clue where to start and are wondering if you should spend all of that money on going somewhere cold, dark and remote!

Firstly, Where is Lapland?! I wasn’t actually sure to be honest. It turns out it’s a part of Finland inside the arctic circle. You can get there from most local airports, including Humberside and Manchester, but we chose to go from Doncaster because it’s close, small and flight times were great.

Secondly, How long to go for? There are 2 options: a day trip or to stay over. I know people who have done the day trip and loved it; we had friends on a day trip while we were there and they had a blast. You can go from Humberside and do the full Santa village in the day. My only issue was the travel; it’s a 2 hour 45 minute flight there (3 hours for us as we had to circle for a while why they tried to clear the runway of snow) and 3 hour 30 minute flight back, plus a 2 hour check in at the airport before and a half hour transfer from the Finish airport to the Santa village. I have a very travel sick child and that sort of journey would need a lengthy recovery!

We had quite a bumpy landing going out, landing in a snowstorm, and he was very sick (I was feeling rough too!) so the last thing I wanted to do when I landed was to go and see Santa. I wanted to recover. However, a day trip is a lot cheaper and if you are ok with travelling and want to have an action packed day, a day trip is definitely an option (for guidance our friends left home in Hull at 3.30am, flew at 6am, got home at 1am the next day). We decided 3 nights would be ideal for us, we could see Santa as well as having a proper holiday – seeing some more of the area and try skiing while we were there which is something else we have talked about doing as a holiday (2 birds 1 stone!).

Who to go with? There were a lot of dedicated Lapland companies that we looked at and had recommended, including Santas Lapland and Canterbury Travel. We settled on a package from Tui, we have used Tui for holidays before and always had great service and their package was cheaper. It was just flights, accommodation and Santa village, you booked the rest as added extras if you wanted them (whereas other package holidays included other activities such as husky rides and reindeer sleighs within the price), details on the Tui website here. 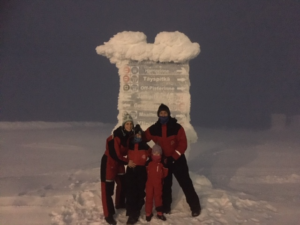 Where to stay? There are 2 airports that service the Lapland area both in Finland, Kitila and Rovaniemi, with several resorts around each one. Levi is the large town with lots going on (and a big ski resort in its own right), other villages are smaller with less hustle and bustle. The further north you are the greater the chance of seeing the northern lights too, something to consider if you would like to try and do that (but they are unpredictable in December). We settled on Yllas, a small village near Kitila airport and stayed at the Saaga hotel in a lovely 2 bedroomed chalet. There wasn’t much in the village; a great bar/restaurant that we popped into often to warm up, a small shop and 2 ski hire places and that was about it! But it was beatiful, quiet and had everything we needed, especially fantastic sledging. It was also close to the airport, the Santa village and the other excursions.

What to take? It is cold and you need to be prepared but we took far too much! It was -9 degrees while we were there but that was warm, apparently and its usually -15 to -20 degrees in December. There are only 4 hours of daylight each day and it quickly cools off late afternoon. After landing at the airport a helpful elf showed us to our coach transfer to put our luggage on then walked us to the adjacent building to collect our snow gear. We each got a snowsuit, snowboots, thick socks and warm mittens, took those back to the coach and off we went. I had packed LOADS of warm clothes, including my kids snowsuits, our own snowboots and at least 5 hats each but the gear they gave us was fabulous and we wore theirs.

Our chalet had a drying unit in the bathroom. I had no idea what it was at first, it looked like a fridge/freezer, so anything that did get wet like hats or gloves from sledging was quickly dried ready to use again. The only slightly weird thing about the snowsuits is that everyone there gets one so you all look like a weird cult or clones, the only unique feature and way to identify your own family is by the hats they had on!

What to do? We arrived on Monday midday in the resort and after ditching our bags and recovering from the travel sickness we spent all afternoon sledging. The hotel had plenty of sledges outside and scattered around the resort to use (no charge in our resort) so we sledged along the lower slopes, fields and the giant snow piles made by the snowploughs clearing the roads. 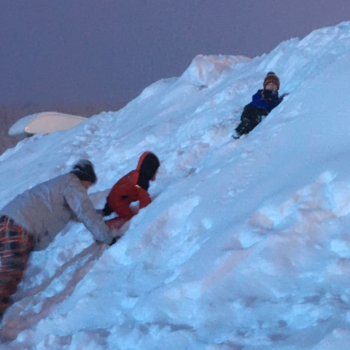 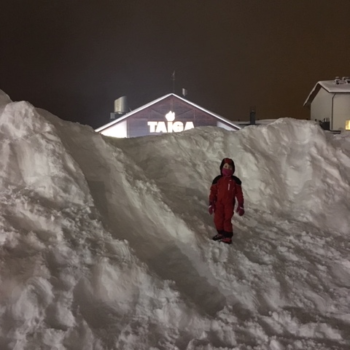 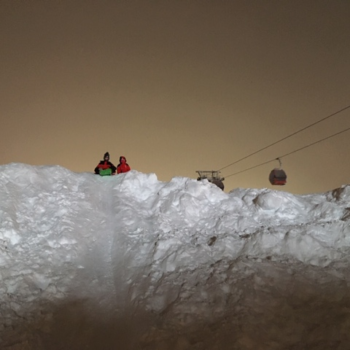 Tuesday was our Santa village day, we were collected and returned by coach from our hotel. The village was fabulous, an ice palace with amazing ice sculptures and carvings too see, there was even an ice slide and steps carved out which we all went on. We had a short snow mobile ride up to Santa’s hut to meet him, then we went back to explore the ice palace and village, had a short husky sleigh ride and bought some souvenirs.

What is the Santa like? Our day at the Santa village was amazing, there was lots to do as well as see Santa. Santa himself was lovely, we got plenty of time with him on our own, his Finnish accent made him very authentic too! (purposely no picture of Santa here so I don’t reveal everything and spoil it all!). I think there are a couple of snow villages with Santa’s in the area but the one we saw was great. My only slight niggle was I don’t think his beard was real (but the kids didn’t spot it!). 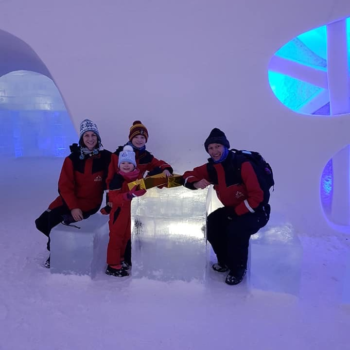 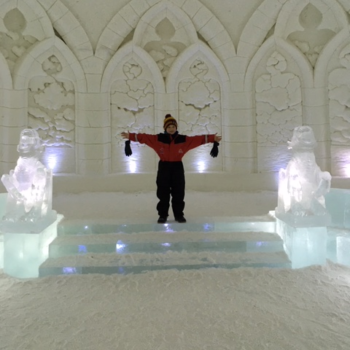 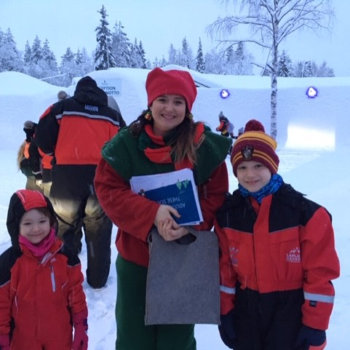 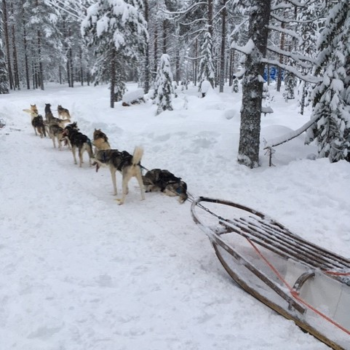 We got back around 3pm so then took a gondola/cable car from our village up to the mountain top (but a snow storm closed in and we couldn’t see anything so just got a drink at the top café and came back down to sledge in our village!).

Wednesday we booked an additional excursion, a reindeer sleigh ride. We were collected on a coach that morning and taken to the reindeer farm where we got a reindeer sleigh ride through the forest and frozen lake, just like in Frozen! It was 2 people per sleigh so me and my daughter had one together with our reindeer Snowbrite pulling us along, it was absolutely magical and my favourite part of the holiday. We then learned about the reindeer and fed them ourselves. 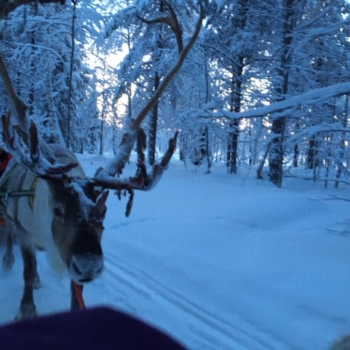 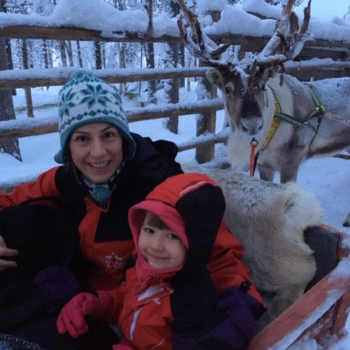 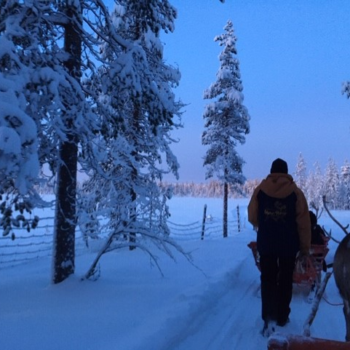 That afternoon we got back and hired ski gear and attempted to teach the kids to ski! This was also a highlight, we all had a great time and my son actually said this was the best bit of the holiday (not Santa! We could have saved a fortune just going to Xscape and skiing there!). Wednesday night was our last night and the ‘gala dinner’ at the hotel, a Christmas dinner with crackers and fun with the elves then fireworks. Thursday we went back to the airport and travelled home. 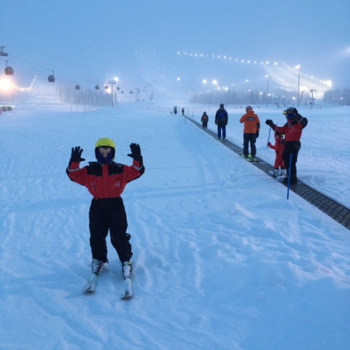 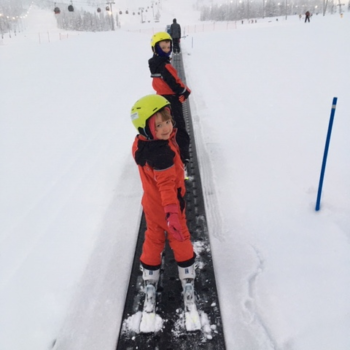 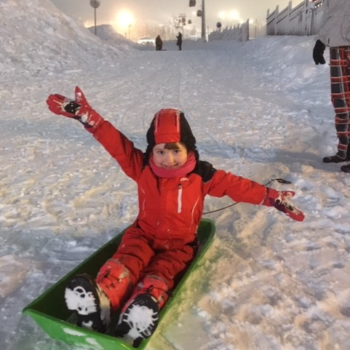 Is it expensive? The short answer is yes. There is so much you could do with the money and I genuinely didn’t ‘get it’ until we’d gone. The days we had there were magical, we’ve talked about it so much since we got back, the kids really did have an experience of a lifetime. Everything is made extra special; there are fairy lights on the coach, you get your own elves to look after you at the airport and in your hotel (we had Candy Cane and Stardust, they were lovely!). It is in a complete wilderness of trees, frozen lakes and snow and it feels a million miles away from normality.

The cost of the packages is eye watering but we’d heard horror stories of it being ridiculously expensive when you got there as well (10 euros for a glass of wine I was told!). We didn’t find it too bad in our small resort.  It was 7 eauros for a pint in the village bar and pizzas were around 12 euros. Ski hire cost 70 euros for me and my 2 children to get ski’s, boots and helmets for an afternoon, the lift pass was free just to use the lower green rated slopes on the carpet lift which is all we needed. It was 10 euros each for a lift pass to go on the button lifts and gondola and use the blue and red rated slopes.

So overall I would highly recommend it. It’s the best holiday we have ever had and probably ever will. The only downside is coming home – we have been pretty down since! Christmas was extra special as we had seen the ‘real Santa’ just before and then he came to us on Christmas Eve (my kids made the ‘mostly good list’ he said) making Christmas Day great, but after that we were on a complete downer – the holiday of a lifetime was over and all we had was a wet, miserable January in Hull with nothing to look forward to! So just be warned about what I am calling the ‘post-Lapland blues!’