Will we be any good at hosting it? Will it live up to expectations? From what I’ve seen and heard so far it looks like being a fantastic year! 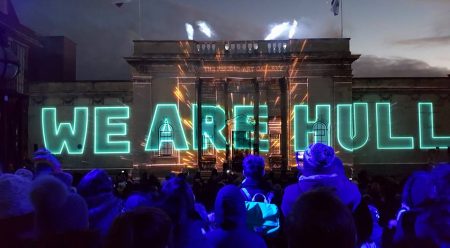 We have well and truly nailed the opening. I watched the New Years Day fireworks by hanging out of my bathroom window and from what I saw they were very impressive. We went to Made in Hull and I was blown away by how well put together it was, the atmosphere and how moving it was. There are images and films projected onto some of the main building walls around the city lasting 10 minutes each, with then 10 minutes off until its shown again. Therefore you can pick and choose your way around the routes and watch the ones you like. I took both my children (who are 2 and 6) when it started at 4pm and we liked the City Hall and the Deep ones best, but just walking along the crowded streets between venues was really fun too, albeit freezing cold! This event finishes on the 7th January so hurry if you haven’t been yet.

The year is being split into four ‘seasons’, the first of which is Season 1, Made in Hull, running January to March. The lovely folk at the City of Culture team have sent me a list of Season 1’s events that are especially suitable for children or families:

Look Up – A series of new art installations around the city. More details:

Bowhead – A new exhibition at the Hull Maritime Museum in Queen Victoria Square. Bowhead, also known as a Greeland Right Whale, is all about commemorating the cities whaling heritage. More details:

Back To Ours – during February half term 20th – 26th February there’s lots of family friendly shows across the city. More details:

Goldilocks and The Three Bears – Northern Ballet’s latest adaptation (which they also show on CBeebies), this year its the classic tale of Goldilocks. 17th March at Bridlington Spa. Also showing at Junction in Goole. More details: